The Internal Revenue Service has resurrected a form that has not been used since the early 1980s, Form 1099-NEC (the NEC stands for non-employee compensation). This form will be used to report non-employee compensation in place of the 1099-MISC, which has been used since 1983 to report payments to contract workers and freelancers. Form 1099-MISC has also been used to report rents, royalties, crop insurance proceeds and several other types of income unrelated to independent contractors.

The revival of the 1099-NEC was mandated by Congress with the passage of the PATH Act back in 2015. However, there have been some complications with implementing the form, so its use has been delayed. It will now make its return debut in 2021 for payments made in 2020.

The reason for the change is to control fraudulent credit claims—primarily for the earned income tax credit (EITC), which is based on earned income from working. Scammers were filing tax returns before the normal February 28 due date for 1099-MISC, which does not give the IRS the time to cross-check the earned income claimed in the returns. As a stopgap measure, 1099-MISC filings that included non-employee compensation were required to be filed by January 31, the same due date as W-2s, another source of earned income. By using the 1099-NEC for non-employee compensation, the IRS will be able to eliminate the problems created by having two filing dates for the 1099-MISC.

As a result, the 1099-MISC has also been revised, and Box 7—where non-employee compensation used to be entered—is now a checkbox for “Payer made direct sales of $5,000 or more of consumer products to a buyer (recipient) for resale.” Other boxes after Box 7 have also been reorganized.

The 1099-NEC is quite simple to use since it only deals with non-employee compensation, which is entered in Box 1, and there are entries for federal and state income tax withholding. 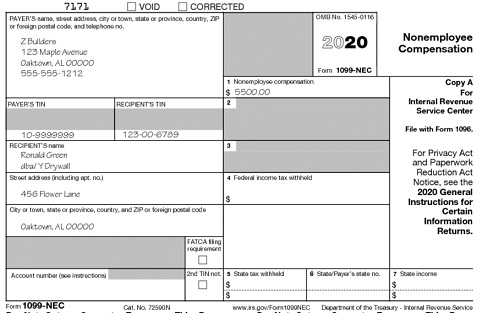 If you operate a business and engage the services of an individual (independent contractor) other than one who meets the definition of an employee, and you pay him or her $600 or more for the calendar year, you are required to issue the individual a Form 1099-NEC soon after the end of the year to avoid penalties and the prospect of losing the deduction for his or her labor and expenses in an audit.

It is not uncommon to have a repairman out early in the year, pay him less than $600, then use his services again later in the year and have the total for the year exceed the $599 limit. As a result, you may have overlooked getting the information from the individual needed to file a 1099 for the year. Therefore, it is good practice to always have individuals who are not incorporated complete and sign an IRS Form W-9 the first time you engage them and before you pay them. Having a properly completed and signed Form W-9 for all independent contractors and service providers eliminates any oversights and protects you against IRS penalties and conflicts. If you have been negligent in the past about having W-9s completed, it would be a good idea to establish a procedure for getting each non-corporate independent contractor and service provider to fill out a W-9 and return it to you going forward.

IRS Form W-9, Request for Taxpayer Identification Number and Certification, is provided by the government as a means for you to obtain the vendors’ data you’ll need to accurately file the 1099s. It also provides you with verification that you complied with the law in case a vendor gave you incorrect information. We highly recommend that you have potential vendors complete a Form W-9 prior to engaging in business with them. The W-9 is for your use only and is not submitted to the IRS.

In order to avoid a penalty, copies of the 1099-NECs you’ve issued for 2020 need to be sent to the IRS by February 1, 2021. They must be submitted on magnetic media or on optically scannable forms (OCR forms).

This firm prepares 1099s for submission to the IRS. We provide recipient copies and file copies for your records. Use the 1099 worksheet to provide this office with the information needed to prepare your 1099s.